Chris was involved in the acoustical design of the auditorium with Pritzker prize winning architect, Jean Nouvel. Hear Chris talk about this ground-breaking project and some of the challenges they faced. 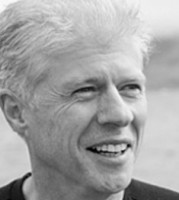 Originally from Australia, Chris settled in New Zealand in 1981 after a one year 'break' sailing the south pacific.

Chris originally studied Mechanical Engineering at Melbourne’s Monash University, and his love of music led him into the world of acoustic design. His engineering background formed a complimentary relationship with Harold Marshall's architectural skills which has helped shape the direction of Marshall Day Acoustics.

They won the contract for Philharmonie de Paris concert hall seven years ago on the back of their prodigious output of top-level designs all over the world for the past 35 years.

Based in Auckland, Marshall Day's clients include architects, lawyers, luxury-yacht builders, planners, engineers, mining companies, local authorities and virtually anyone seeking creative ways to either enhance or reduce noise and vibration.
Many people will have experienced their work without even knowing it.

If you have visited Eden Park or Christchurch Airport, watched films produced at Peter Jackson's Park Road Post studios or basketball at Vector Arena, the sound and vibration was sculpted by Marshall Day.